This picture shows the temple of Concord at Akragas, which is one of the best preserved Doric temples.

_Problems with some present views about the Greek Doric temple.

The Greek Doric temple is one of the most peculiar building-types in the history of architecture. The generally accepted interpretations of it are still based on the words of the Roman writer and architect Vitruvius although, in fact, he lived about half a millennium later. On these pages we will show, how and why these interpretations are unacceptable in many ways. Especially true this is about the so called "optical corrections." An alternative interpretation is presented in my book.
The picture below shows the temple of Zeus at Olympia, which is a typical classical Doric temple in its fully developed form. 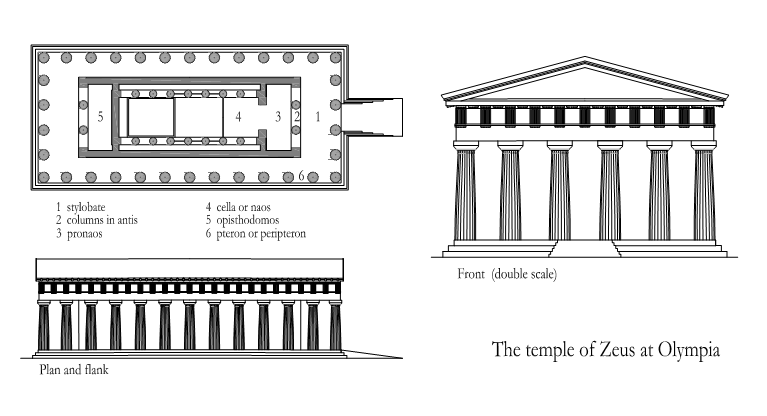 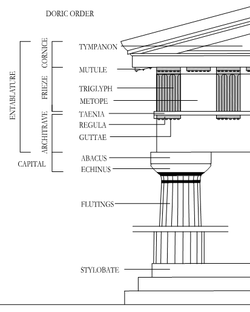 The basic conception of the Doric temple and the Doric order remained the same for several centuries although there was some development of form during time. There were some differences in the plan, especially in the colonies but even in Greece. Some features, however, never changed; the outermost triglyph was always situated at the corner - in both directions, thus causing the well known Doric "corner conflict" (see the relevant page). Further, there was never a base under the Doric column unlike the Ionic one, (with the exception of the temple of Zeus at Akragas, which is exceptional in many other ways too). The basic form of the capital, as well as the principle of fluting were always done according to the same principle in strong contrast to the Ionic Order. The question is, what was there so fundamental about this basic conception of the Doric order that the architects never even tested other possibilities in spite of much experimentation within these limits?